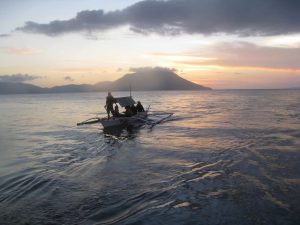 The Philippines PIRE project: Centennial Genetic and Species Transformations in the Epicenter of Marine Biodiversity is a collaborative effort among marine biologists from Silliman University in the Philippines and the U.S. institutions Old Dominion University, Arizona State University, Rutgers University, Texas A&M University – Corpus Christi, and the Smithsonian National Museum of Natural History. The overarching goal of this PIRE project is to investigate changes in evolution, connectivity, and community composition of marine fishes of the Philippines that have taken place over the past century of substantial human impacts.

How has the genetic diversity of marine fishes in the Philippines been altered over the past century?

The biodiversity of marine habitats in the Philippines is threatened by climate change, habitat destruction, and overexploitation. Between 1907 and 1909, the USS Albatross expedition to the Philippines resulted in one of the greatest marine natural history collections in history, including over 91,000 specimens of fishes. Preservation of these specimens in ethanol permits the use of advanced genomic methods to investigate the demographic history and genetic structure and relationships of these fishes. Comparisons with recently collected fishes will enable us to evaluate changes over time in order to identify species that may be more susceptible than others to genetic diversity loss, and to determine whether overfishing and habitat loss have reduced gene flow between marine populations.

Read The Great Albatross Philippine Expedition and Its Fishes by Dr. David G. Smith and Dr. Jeffrey T. Williams of the Smithsonian Institution to learn more about this historic voyage.

To what extent do genetic diversity and species diversity reveal similar changes over a century of human impacts?

In order to frame both the genetic and species level changes that we will directly measure over time with respect to changes in the overall marine biodiversity, we plan to collaborate with on-going efforts in the Philippines to conduct a National Philippine Red List for marine species. This effort will be based on assessments of the population and conservation status of all marine fishes present in Philippine waters, following established International Union for the Conservation of Nature (IUCN) Red List assessment methodology. The completion of a Philippine National Red List will transform conservation and fisheries management in the Philippines.

Spearheading the U.S. side of the collaboration are Old Dominion University, Rutgers University, Arizona State University, Texas A&M University – Corpus Christi, and the Smithsonian National Museum of Natural History. Researchers from these universities will be working in partnership with scientists at Silliman University, the National Fisheries Research & Development Institute, and Mindanao State University in the Philippines to advance our understanding of genetic and species transformations in the epicenter of marine biodiversity. For information on undergraduate opportunities for participation in the Philippine PIRE Project, read about our International Research Experience for Undergraduates.

Scroll Up
We use cookies to ensure that we give you the best experience on our website. If you continue to use this site we will assume that you are happy with it.Accept