Joseph M. Marchello, chancellor of the University of Missouri at Rolla, became the fourth president of Old Dominion University upon the retirement of Alfred B. Rollins Jr. in 1985. President Marchello brought energy and ability to the position and set ambitious plans for the development of the university, some that materialized after his tenure. Upon his resignation in 1988, Marchello worked at NASA Langley Research Center and then returned to Old Dominion to teach engineering classes. 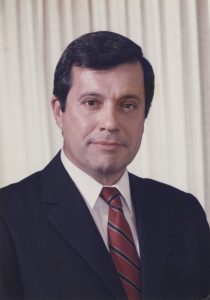 Faced with budget shortfalls in the 1980s, President Marchello found ways to improve facilities and laid the groundwork for future expansion of the university. Under his tenure, the Higher Education Centers in Hampton and Virginia Beach were established, athletic facilities were improved, and he set in motion the creation of the F. Ludwig Diehn Center for the Performing Arts as well as the expansion of Webb University Center and the Lions Club Child Care Center.