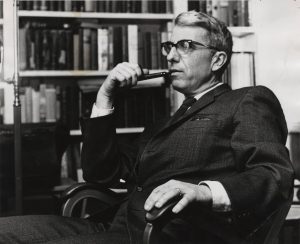 James L. Bugg Jr. was personally recruited by Rector Frank Batten in 1969 to become president upon the retirement of Lewis W. Webb Jr. President Bugg’s mission was to transition Old Dominion from a college to a university. He was able to grow the university despite resistance from state legislators and other Virginia schools that did not see the need for another university. After stepping down in 1976, Dr. Bugg taught classes on campus until 1991.

During his presidency, President Bugg launched many new academic programs, including the first doctoral degrees in oceanography and engineering, degrees that would distinguish Old Dominion in years to come. He also created Old Dominion’s first University Senate, a campus-wide governance system with faculty, staff, and student representatives. President Bugg began the process of bringing the salaries of women faculty to equal those of men, and the Women’s Caucus was created during his tenure.

President Bugg also believed that the university should be integrated into the Hampton Roads community it served. He created the Office of Information Services to keep the local community and the legislature informed of news and accomplishments related to Old Dominion. During his tenure, Bugg initiated new noncredit programs to help locals improve their skills and developed programs important to Hampton Roads including urban arts and education, health, and marine science.